Amid SA’s mayhem, SAPOA calls for punitive and decisive action 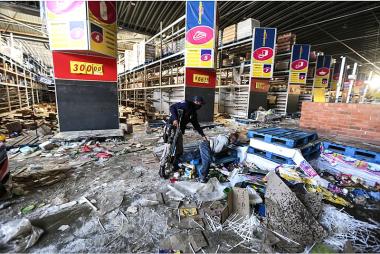 A police officer arrests a looter inside a Cambridge Food store in Vosloorus on July 12 2021.

Following this weekend’s spate of unrest across the country, the South African Property Owners Association (SAPOA) strongly condemns the incidents of looting and malicious damage to retail property centers.

Violence and looting continued in parts of Gauteng and KwaZulu-Natal on Monday, despite President Cyril Ramaphosa warning that those behind the violent protests and anarchy would be arrested and prosecuted.

Maponya Mall and Jabulani Mall were looted today, and the Dobsonville Centre yesterday. All these centres are not far from police stations.

SAPOA further points out that this maliciousness and damage to infrastructure and other property, is only going to further exacerbate the country’s socio-economic challenges, the broader financial impact of the looting and property destruction undermines the country’s economic confidence and will in all likelihood result in a greater economic downturn.

“Clearly our police services are being overwhelmed and are ill equipped to deal with the magnitude, scale and nature of the violence and destruction that is happening around us. 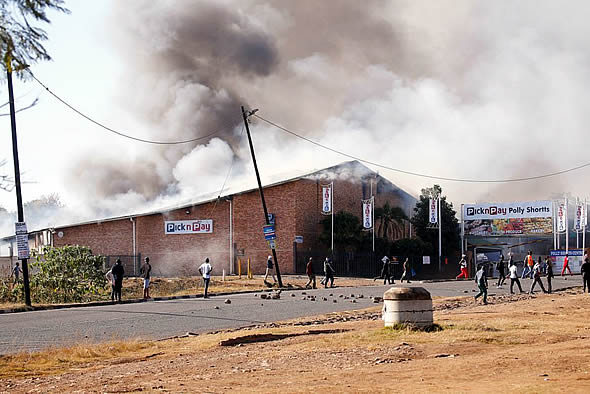 We are pleased that the Presidency has deployed the South African National Defence Force to help curb the situation, and for those who have been arrested to feel the full might of the law and be given punitive jail sentences that reflect our society’s disdain of this criminal behaviour.”

Shops were looted overnight, a section of highway was closed and stick-wielding protesters marched through Johannesburg on Sunday, as sporadic violence following the jailing of former South African President Jacob Zuma spread.

The unrest had mainly been concentrated in Zuma’s home province of KwaZulu-Natal (KZN), where he started serving a 15-month sentence for contempt of court on Wednesday night.

Zuma’s sentencing and imprisonment have been seen as a test of the post-apartheid nation’s ability to enforce the law fairly – even against powerful politicians – 27 years after the African National Congress (ANC) ousted white minority rulers to usher in democracy.