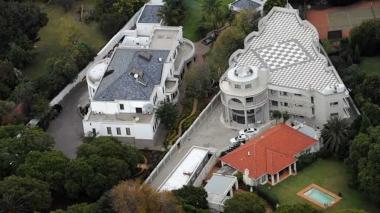 Described to be the most high profile auction event of the year, the property in the affluent leafy suburb of Saxonwold in Johannesburg, belonging to Gupta family was sold for R2.6 million on Monday morning.

The Gupta family has a well-documented history in South Africa, particularly their close ties with former president, Jacob Zuma.

The family has since fled the country following accusations that it used its political influence to interfere in ministerial appointments to advance their business interests as part of a campaign to “capture the state”.

The property was as recently as last month used by Tshepiso Magashule, son of ANC secretary general, Ace Magashule, according to the Mail & Guardian.

The paper noted that business rescue practitioners have been selling off a number of properties owned by the infamous family.

“It appears that the Business Rescue Practitioners (BRP) overseeing matters related to Confident Concept (Pty) Limited- one of the several Gupta companies placed under business rescue—are determined not to waste any time in realising the Gupta assets,” said Park Village Auctions.