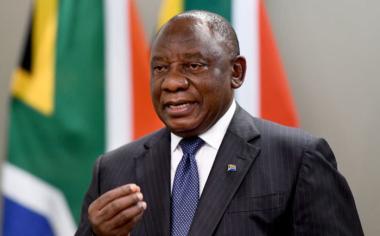 President Cyril Ramaphosa has unveiled the R500 billion economic recovery stimulus package that will form part of the national response to support South Africans dealing with the consequences of the coronavirus (COVID-19) pandemic.

President Cyril Ramaphosa has unveiled the R500 billion economic recovery stimulus package that will form part of the national response to support South Africans dealing with the consequences of the coronavirus (COVID-19) pandemic.

SA has unleashed its biggest once-off stimulus injection into the struggling economy in response to the Covid-19 pandemic that has led to a lockdown of the country for the past 25 days.

The President addressed the nation on Tuesday evening saying that experts had told him that the outbreak was still in only its early stages.

He focused on the economic responses government is taking and will take to mitigate the worst effects of the pandemic.

Ramaphosa said R500 billion would be spent – about 10% of the country’s GDP. R200 billion of this would be disbursed in the form of loans to companies needing cash flow to survive the shutdown of the economy and the global depression.

A range of tax relief measures would see about R70 billion kept in the pockets of companies and staff currently suffering.

Taxpayers donating to the solidarity fund would be able to claim up to an additional 10% as a deduction from their taxable income.

“To assist a greater number of business, the threshold for tax deferrals will be R100 million a year.”

R100 billion would be spent to protect and create jobs.

“R40 billion has been set aside for income support for employees whose employers unable to pay wages.”

R50 billion would also be spent in a temporary increase of social grants for beneficiaries.

The department of social development would oversee the application and disbursement of funds.

Ramaphosa said he would give further details on Thursday on the gradual measures that would be implemented to slowly lift the lockdown.

“We will follow a phased approach. As we do so, we remain firm in our resolve to contain the virus. We will need to act with flexibility in the weeks and months ahead.”

Government would prioritise protective gear for workers and increase the numbers of hospital beds and ventilators. An extra R20 billion would be made to municipalities for emergency water supplies, public transport and sanitation, and to provide food and shelter for the homeless.

Investec chief economist Annabel Bishop said that the stimulus package appeared well targeted, “but the details will reveal how effective it will be”.

The president appeared to be “considering a “very, very slow” process of starting to open up the economy,” chief economist of the Bureau of Economic Research, Professor Hugo Pienaar said, adding that the support package was probably more than what most people expected.

Several other economists agreed that Ramaphosa’s measures showed he was aware of Covid-19’s social and economic ramifications for South Africa.

Economist from the National Agriculture Marketing Council, Sifiso Ntombela, praised Ramaphosa’s commitment to protecting the most vulnerable South Africans. He said he looked forward to seeing how Mboweni would implement’s the said “risk-adjusted approach”.

Business Leadership South Africa CEO Busisiwe Mavuso added that it was “central” that government was “clearly trying to ensure that there is money in the hands of South Africans”.

“The president knows those growth figures and unemployment projections that are coming. He also knows that without disposable income, you can’t kickstart the economy,” said Mavus