King Air Industria in Cape Town will host The Courier Guy in a 10,112m2 building facility.

The demand for logistics business parks rather than warehousing is rising, prompting property investors to increase their allocations and exposure in the Industrial sector.

The development, alone represents a R3 billion investment in the Mother City and has taken more than three years of planning.

Infrastructure is nearing completion for the first two phases of the 72-hectare project.

Internal services will be ready by end-April. Extensive external road upgrades to Robert Sobukwe and Borcherds Quarry roads as part of the development will be completed by the end of May 2021, when the park will officially open.

The Courier Guy will be the first business to start operating at King Air Industria in a 10,112m2 turnkey facility, from 1 July 2021. Then, from 1 September 2021, Morgan Cargo will begin trading in a 7,500m2 tailor-made facility comprising a contemporary provincial head office and a specialised cold storage facility.

Arno du Plessis, Atterbury’s development manager for King Air Industria Cape Town, reports, “The imminent completion of infrastructure for its first phases has put King Air Industria on the map as a ready-to-develop the business site.”

The King Air Industria Cape Town site allows for the development of 280,000m2 of facilities. 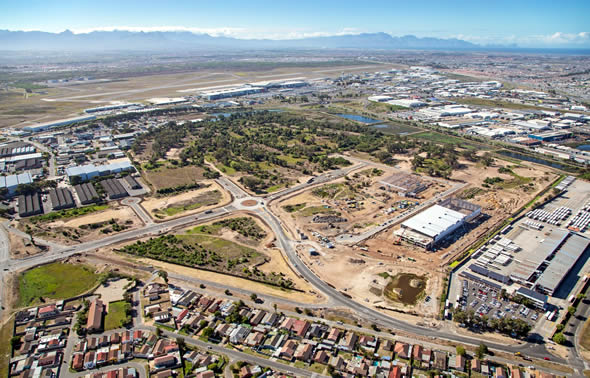 The project is on a prime site between Airport Approach, Borcherds Quarry, Robert Sobukwe and Pallotti roads and connected to the region with access to the N2 highway and the R300 freeway.

James Ehlers, Development Director for Atterbury, comments, “The development roll-out of King Air Industria is making progress at a very exciting time for logistics, warehousing and certain types of industrial property in South Africa generally, and in Cape Town specifically.”