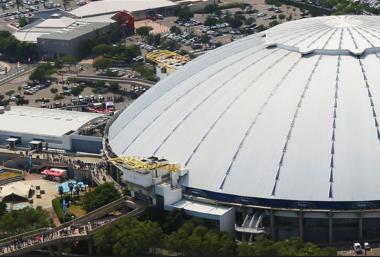 It’s win-win as WeBuyCars snaps up the Ticketpro Dome from the Sanlam Pension Fund, and plans to use the venue as a second-hand vehicle showroom.

It’s a win-win as WeBuyCars snaps up the Ticketpro Dome in Northgate, Johannesburg, and plans to use the venue as a second-hand vehicle showroom.

While the effects of the pandemic on the SA economy are well-documented, few have considered the hammer blow Covid-19 has dealt the arts and entertainment industry.

RX Venue Management, which has managed events at the venue in Northgate for the last 20 years, announced on Monday (20 July) that the iconic Dome had been shut down due to it being sold.

According to WeBuyCars, the purchase will enable the company to increase its footprint in Johannesburg and will allow the venue to serve its original purpose.

The Dome opened in 1998, serving as a key event hall for many international artists and exhibitions, as well as trade shows and fairs over the years. It has also hosted sporting tournaments such as the NBA Africa Games, and the WWE International.

WeBuyCars chief executive Faan van der Walt said that the Dome was originally intended to be a permanent motor showroom, however, allowing people to view and test drive a variety of vehicle brands under one roof.

He said WeBuyCars will develop the space, turning it into one of the biggest second-hand car dealerships in the world.

“Apart from cementing our presence in northern Johannesburg, we are confident this growth path will have a positive impact on the economy. We have always been proud of our roots and this next step in our expansion plan demonstrates our commitment to the South African car market which has significant growth potential,” he said.

The Dome will be able to store approximately 1,500 vehicles, providing customers with an array of choices, the group said.

The company already has vehicle supermarkets in Cape Town, Durban, Midstream, and Johannesburg, and is planning to launch an additional three supermarkets over the next 18 months in Gauteng, Western Cape, and Eastern Cape.

WeBuyCars is 74.9% owned by credit provider Transaction Capital. The remaining 25.1% of the shares in the group are held by the family trusts of the founding shareholders, Faan and Dirk van der Walt.

The company is a principal trader of used vehicles through its integrated e-commerce and physical infrastructure, offering finance, insurance, and other allied products.

It buys and sells approximately 8,000 vehicles countrywide on a monthly basis. Its medium-term target is to increase the volume of vehicles traded to 10,000 vehicles per month, which it says remains on track.